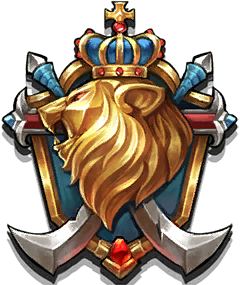 The Empire of the Sands

Emperor Khorvash claims the mandate of the God Anu as he rules his desert kingdom.
Troops

Servant of the Dao,

Pendant of the Empire,

Travel to the Leonis Empire.

Complete this quest to unlock a new Challenge.
Hero: I had heard of the marvels of the Leonis Empire...
Hero: ...Of its golden palaces and monuments.
Hero: I'd also heard good things about the Emperor Khorvash.
Hero: So I set out to meet him.
Hero: But as we were crossing the sands...
Hero: ...Things got a little strange.
Amira: That was very impressive!
Hero: Who are you?
Amira: My name is Amira, and I seem to be traveling your way.
Hero: I see.
Amira: The deserts here are full of many dangers.
Hero: I'm aware.
Amira: Would you mind if I traveled with you?
Hero: Not at all.

Panic at the Fresco

Quell a Riot at the Temple of Orpheus.

Complete this quest to gain an Income Bonus in this Kingdom.
Amira: There seems to be a commotion at the Temple up ahead.
Hero: Temple?
Amira: It's a Temple to Orpheus, home of the Devoted and the Manticores.
Hero: Really?
Amira: Indeed. The Priestesses interpret the Manticores' songs.
Hero: I see.
Amira: I hear no songs today though, only battle. Let's investigate.
Hero: Very well.
Amira: The rebellion has spilled out to the borders, I see.
Hero: Rebellion?
Amira: You've not heard of the REBELLION? You ARE new here!
Hero: I am.
Amira: A number of factions have risen against the Emperor.
Hero: Bad timing.
Amira: At least the Devoted of the Temple have not turned traitor... yet.
Hero: Indeed.

Finally, make your way to the city of Leothasa.

Complete this quest to unlock a new Challenge.
Amira: Well THIS is going to be unpleasant.
Hero: What is?
Amira: There are no guards on the city gates, only rebels.
Hero: Oh...
Amira: My guess is that the Emperor is away from the city.
Hero: I see.
Amira: That's not going to stop us though. Come on!
Hero: Wait up!
Amira: Turns out approaching the gates was a bad idea.
Hero: If you'd waited...
Amira: Waiting is for tortoises. We Wargare don't wait very well.
Hero: That's obvious.
Amira: They have us surrounded. Only one thing for it!
Hero: We fight?
Amira: By the GODS no! We surrender!
Hero: WHAT!

Escape from the Rebels who have captured you.

Complete this quest to gain an Income Bonus in this Kingdom.
Amira: You sure got us into a fine mess.
Hero: YOU did that!
Amira: Semantics. I'll get us OUT of it though.
Hero: What now?
Amira: I'll talk our way out. Listen and learn!
Hero: Oh, no...
Amira: HEY! Gator-face! Let me talk to the boss.
Hero: This will go well.
Amira: Turns out running WAS a better idea. Good thing I had a plan B.
Hero: If you say so.
Amira: But, hey, at least we're in the city!
Hero: Agreed.
Amira: But we better not wait around.
Hero: So what then?
Amira: Follow me to an Imperial Barracks. We KNOW they're loyal.
Hero: Lead on.

Reach an Imperial Barracks, and fight off any remaining rebels.

Complete this quest to unlock a new Challenge.
Amira: The barracks is just up ahead. Come on!
Hero: On my way.
Amira: These rebels are persistent. They're right behind us.
Hero: I know.
Amira: We'll need to fight, but should still make for the barracks.
Hero: Right behind you.
Amira: Hmmm... The guards here seem to know you.
Hero: Oh?
Amira: They seem to have been expecting you.
Hero: I see.
Amira: Are you somebody important?
Hero: Depends...
Amira: Oh, modesty, I see! A guest of the Emperor then? Interesting...
Hero: Enough.

Search the city of Leothasa for any rebel activity.

Complete this quest to gain an Income Bonus in this Kingdom.
Amira: So, the guards here tell me the Emperor is due back today.
Hero: Aha!
Amira: He's been away, helping in the outlands.
Hero: Sounds right.
Amira: That explains all the goons at the gates, waiting for him.
Hero: It does.
Amira: The Guards want us to help root out any more rebels who may pose a threat.
Hero: Let's go.
Amira: The city is quite beautiful - apart from the rebels. It's my first time here.
Hero: Really?
Amira: I had thought it would be a lot more seedy.
Hero: Why?
Amira: When everyone wants a leader dead, he is usually a tyrant.
Hero: Ahh...
Amira: But these people, they are not oppressed at all.
Hero: I know.

Help protect the Emperor as he arrives home to the city.

Complete this quest to unlock a new Challenge.
Amira: The guards are heading out to meet the Emperor now.
Hero: Okay.
Amira: They've asked us to join them again.
Hero: Very well.
Amira: Things are bad here. The guards seem terribly outnumbered all the time.
Hero: I know.
Amira: But I would like a chance to meet this Emperor.
Hero: Then let's go.
Amira: Wow! EVERYBODY wants him dead!
Hero: So it seems.
Amira: Even the Devoted are attacking him now.
Hero: I saw.
Amira: You'd think he must be the worst Emperor ever!
Hero: I'm not so sure.
Amira: Nor am I. Let's head back to the barracks. I need to think things through.
Hero: Okay.

Rebels Without a Cause

Attack the rebel base in the capital city, Leothasa.

Complete this quest to gain an Income Bonus in this Kingdom.
Amira: The guards are heading out to search for rebels again.
Hero: Again?
Amira: I'm going to tag along. You wanna come too?
Hero: Sure.
Amira: I want to understand these rebels a little more.
Hero: Why's that?
Amira: They hate the Emperor, but I don't understand why. I'm confused.
Hero: Okay.
Amira: I've seen enough. I think the rebels must be mad.
Hero: You do?
Amira: Emperor Khorvash... His city is a fine place.
Hero: It is.
Amira: The wonders he has wrought here, the things he has built...
Hero: I know.
Amira: He... he doesn't deserve to die.
Hero: I agree.

There's always one more danger! Take care of it.

Complete this quest to unlock a new Challenge.
Hero: The Emperor greeted us upon our return.
Hero: Then suddenly there was movement...
Amira: Hey! That Lion Prince!
Hero: What about him?
Amira: He's making straight for the Emperor!
Hero: So he is!
Amira: We've got to stop him!
Hero: Let's go!
Amira: I... I have something to admit.
Hero: What's that?
Amira: I'm not just a traveller you found in the desert.
Hero: Figured as much.
Amira: I'm an assassin. I was hired to get close to the Emperor and kill him.
Hero: WHAT?
Amira: But... I can't do it. He seems like a good man.
Hero: Okay, wow...

Protect Amira from your allies.

Complete this quest to gain an Income Bonus in this Kingdom.
Hero: I was taken aback by Amira's admission.
Hero: But some of the guards also overheard!
Amira: You've got to help me! Please!
Hero: But you said...
Amira: Please! I would not have told you if I still planned to kill the Emperor.
Hero: Hmmm...
Amira: Please! They'll kill me!
Hero: Very well.
Amira: Thank you! We need to get out of here. Now!
Hero: I agree.
Amira: I've been an Assassin for many years, but this time...
Hero: Yes?
Amira: I see how people respect you. I want to be like that.
Hero: Like me?
Amira: Yes. A hero. Not a tool for rich men.
Hero: I'm a bit of a tool.

Sneak into the Imperial Palace.

Complete this quest to unlock a new Challenge.
Amira: The rebellion is too big. The Emperor can't possibly win.
Hero: I know.
Amira: We can do ONE thing for him though.
Hero: What's that?
Amira: We can PRETEND to kill him. Then help him get away.
Hero: But...
Amira: No buts... He'll see the wisdom of the plan. Come on!
Hero: Very well.
Amira: We're in the palace! We need to find his quarters.
Hero: I agree.
Amira: Follow me! He'll be in the most lavish rooms.
Hero: Are you sure?
Amira: Of course I'm sure! The Emperor wouldn't sleep in an outhouse!
Hero: Fine...

Complete this quest to unlock Amira.
Amira: And here he is in the most austere place possible.
Hero: Told you so!
Amira: He even has that smelly manticore with him.
Hero: Smelly?
Amira: I'm a Wargare, silly. I can smell it from 2 miles away.
Hero: Ahhh...
Amira: Now, come on. You knock him out, and I'll get him away from here.
Hero: Okay...
Amira: Nice work! Looked real. Now I've just gotta move him. He's heavy.
Hero: Umm... Armor?
Amira: Of course! Armor! I'll get him out of here, then meet you at the gates.
Hero: Very well.
Amira: And then I'm joining you. I've got a lot to learn about this hero thing!
Hero: Okay.
Hero: It was a busy day. We toppled an Empire!
Hero: And saved an Emperor!

Help Amira rebuild Leonis, by becoming a Warpriest of Anu.

Unlock the Warpriest Hero Class
Amira: After the defeat of the Emperor, there is much unrest here in Leothasa.
Hero: Oh?
Amira: The Warpriests of Anu, the imperial deity, are in decline.
Hero: Not good.
Amira: Could you help them rebuild their order?
Hero: If I can.
Amira: Perhaps I can help too.
Hero: Very well.
Amira: I think that should do it!
Hero: Oh?
Amira: The faith of the people is restored in the Order of Anu.
Hero: That's good.
Amira: And the Order's pride in itself is restored too.
Hero: Excellent.
Amira: I think they will call you one of their own - a true Warpriest.
Hero: Warpriest! Yeah!
Last updated: 06/28/2022
GoWDB.com © Lyya (ashenbloom@gmail.com)
This is a fan site. All Gems of War contents are owned by Infinity Plus Two.
Game art images courtesy of Garyatrics.com -- check them out!
Team Builder
Publish Team
Suggestions