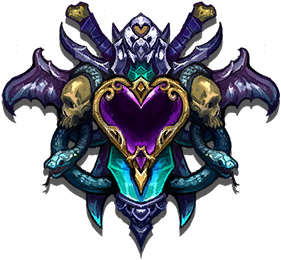 Bile Blackheart leads a gang of renegade elves as assassins for hire.
Troops 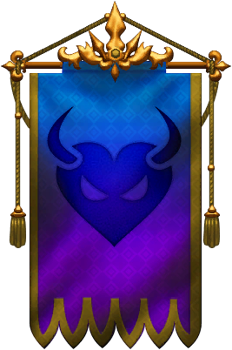 Find the entrance to Blackheart's Lair.

Complete this quest to earn 100 Souls.
Hero: I noticed Amira looking around suspiciously.
Hero: Shortly after, she approached me.
Amira: I have heard of this place.
Hero: Really?
Amira: I had no idea it was in the Underworld though.
Hero: Are you sure?
Amira: I am certain. The assassin, Bile Blackheart, dwells nearby.
Hero: Okay.
Amira: Those Dark Elves were Nightarrows.
Hero: Nightarrows?
Amira: They are servants of Blackheart - assassins, like their master.
Hero: I see.
Amira: I have a score to settle with Blackheart though.
Hero: Oh?
Amira: I'll tell you more as we travel.
Hero: Okay.

Complete this quest to earn 100 Souls.
Amira: You're probably wondering how I know about this place.
Hero: I am.
Amira: When I was one of the Sisters of Shadow, I was once shown this lair.
Hero: You came here?
Amira: No, I was never here. I was shown it in the Mother's scrying orb.
Hero: I see.
Amira: And we must be careful. Bile Blackheart's Plaguecrafters guard the entrance with gas traps.
Hero: Lead on!
Amira: Blackheart is a Daemon, you see - much like the Mother of Shadows.
Hero: Okay.
Amira: They were allies once, though he was never her equal.
Hero: What happened.
Amira: Greed... Bile Blackheart stole the Mother's prized dagger.
Hero: A thief!
Amira: Then he killed many of my Sisters and fled.
Hero: And a murderer...

Complete this quest to earn 100 Souls.
Amira: Blackheart's Deathblades will be all through the halls.
Hero: Deathblades?
Amira: His most trusted servants. Dark Elves again, with wicked knives.
Hero: Oh...
Amira: We must press on though. Bile Blackheart must die.
Hero: Very well.
Amira: I wonder if he still has the Mother of Darkness' dagger.
Hero: Let's find out.
Amira: It's not difficult to find him. The whole place is shaped like a dagger.
Hero: So I See.
Amira: Blackheart was always overly dramatic...
Hero: Oh?
Amira: He'll be at the point. He can't help himself.
Hero: Ha.

Shot Through the Heart

Complete this quest to earn 100 Souls.
Amira: Here we are then. Bile Blackheart is beyond that door.
Hero: What now?
Amira: I am not doing this for the Mother - I left the Order long ago.
Hero: Okay.
Amira: I am doing this for my Sisters that he murdered.
Hero: I understand.
Amira: Come then, let's confront him!
Hero: Lead on.
Amira: He's dead... I think...
Hero: You think?
Amira: Blackheart was always full of tricks. That fight was... too easy.
Hero: Ahh...
Amira: Keep an eye out - you never know - he may pop up again.
Hero: I will.
Amira: Thank you for help with this. Even if he's not dead - a lesson was taught.
Hero: Indeed.
Last updated: 07/20/2022
GoWDB.com © Lyya (ashenbloom@gmail.com)
This is a fan site. All Gems of War contents are owned by Infinity Plus Two.
Game art images courtesy of Garyatrics.com -- check them out!
Team Builder
Publish Team
Suggestions