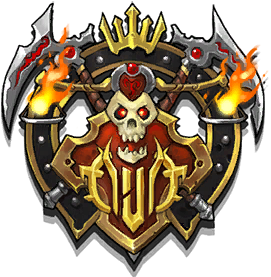 Gateway to the Underworld

Once capital of the Maraji Empire, this city was destroyed long ago.
Troops

The Scourge of Honor, 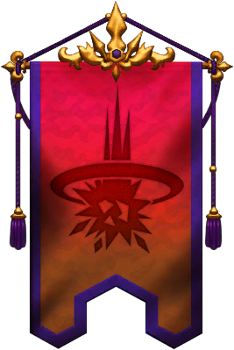 The Road to Hell

Follow the lights in the sky towards the Sin of Maraj.

Complete this quest to unlock a new Challenge.
Hero: We set out following lights in the night sky...
Hero: Towards a ruin known as the Sin of Maraj.
Luther: There are no good tales of this place.
Hero: How come?
Luther: Long, long ago it was the center of an ancient empire.
Hero: And?
Luther: And it didn't end well for them.
Hero: I see.
Hero: The lights over the Sin of Maraj grew closer...
Hero: And the ruins grew taller before us.
Luther: A thousand years ago this was a city.
Hero: It was?
Luther: Aye, the center of Al-Maraj, stretching across the whole Southwild.
Hero: What happened?
Luther: War happened. A war against the Fey they could never win.
Hero: Ahhh.

Enter the ruins of the Sin of Maraj.

Complete this quest to gain an Income Bonus in this Kingdom.
Luther: The Maraji Empire grew from this very spot.
Hero: Really?
Luther: It covered almost the entire Southwild.
Hero: All of it?
Luther: Aye. Leonis. The Sands, The Centaurs and Tauros. All of them.
Hero: Wow.
Luther: Ha! Not the Dark Elves though. Let's go in.
Hero: Okay.
Luther: Do you feel something odd here? I can't quite put my sword on it.
Hero: Nor can I.
Luther: I expected wild beasts, not Daemons everywhere.
Hero: Yeah.
Luther: Maybe leftover Fey magic has drawn them here.
Hero: Perhaps.
Luther: Or maybe we're jumping at shadows.
Hero: I doubt that.

Look for any sign of activity in the Ruins.

Complete this quest to unlock a new Challenge.
Luther: I have to admit, my old bones are getting weary.
Hero: I am too.
Luther: Ha! You're too young to be weary! Wait... Take care!
Hero: Why?
Luther: This may be magic at work.
Hero: Really?
Luther: Let's press on. Just for a bit.
Hero: Okay.
Luther: That Daemon, I think HE was the cause of our tiredness.
Hero: Really?
Luther: He carried this Seal - it bears the Mark of Sloth.
Hero: Aha.
Luther: Al-Maraj was ruled by an Emperor, and seven Lords.
Hero: Oh?
Luther: One was known as the Lord of Sloth. Perhaps this Daemon served him once.
Hero: I see.

Empire of the Sin

Travel deeper into the ruins of the Sin of Maraj.

Complete this quest to gain an Income Bonus in this Kingdom.
Luther: I wonder if other Daemons like him are around?
Hero: Maybe.
Luther: We should investigate further.
Hero: Very well.
Luther: There's something going on here...
Hero: I agree.
Luther: And we'll likely do the world a favor if we discover what it is.
Hero: Let's go.
Luther: Hmm... Nothing so far.
Hero: No.
Luther: But we DO have a friend with a nose for trouble and treasure.
Hero: Indeed!
Tyri: Did somebody say 'treasure'?
Hero: And there she is.
Tyri: You know the best way to find treasure? Follow me!
Hero: Okay!

Defeat the Daemons, and discover why they are attacking.

Complete this quest to unlock a new Challenge.
Tyri: Oh, oh, OH! I can SMELL the treasure!
Hero: You can?
Tyri: Did I just sound like Ferit? Ewww... Never mind.
Hero: Okay...
Tyri: Seriously though. This way! Run!
Hero: Wait up!
Luther: We'd best go after her.
Hero: Very well.
Tyri: Wait... Where's the treasure?
Hero: Where indeed.
Luther: I found this on the Daemon.
Hero: What is it?
Luther: Another Seal, with the Mark of Greed.
Hero: Of course.
Luther: A servant of the Lord of Greed, no doubt.
Hero: Two down.

Push towards the center of the Ruins.

Complete this quest to gain an Income Bonus in this Kingdom.
Luther: I wonder what the Seals are for.
Hero: No idea.
Luther: If we press on, we might learn more.
Hero: Okay.
Luther: Or at the very least what's been lighting up the sky.
Hero: Lead on.
Luther: The third Seal! It has the Mark of Lust.
Hero: Lust!
Luther: Well I'm glad THAT one didn't affect me.
Hero: Me too.
Luther: Let's press on. See what we can find.
Hero: Okay.

Of Gates and Seals

Investigate the Seal Stones as you travel to the center of the ruins.

Complete this quest to unlock a new Challenge.
Luther: I need to remember my ancient history...
Hero: Why's that?
Luther: The War of the Fey that destroyed this city... Something important...
Hero: Important?
Luther: Their Emperor, Scorpius, was already defeated, and the Seven Lords...
Hero: Yes?
Luther: They tried a spell. Something went wrong. I wonder if the Seals were involved.
Hero: Let's investigate.
Hero: We finally arrived at the center of the Ruins...
Hero: And found a huge Portal to... Somewhere.
Luther: Well this can't be good.
Hero: What is it?
Luther: I'm at as much of a loss as you, my young friend.
Hero: Hmmm...
Luther: But I bet if we find the other 4 Seals, we close it!
Hero: Let's go!

Find and defeat the Fourth Sin.

Complete this quest to gain an Income Bonus in this Kingdom.
Luther: Well, it seems we should keep hunting for Seals.
Hero: I guess.
Luther: Envy, Pride, Gluttony, and Wrath remain.
Hero: Aha!
Luther: I remember now - the Seven Lords were known as the Seven Sins!
Hero: I see!
Luther: Another Seal! Only three remain.
Hero: Good.
Luther: If only the Maraji hadn't started that war.
Hero: What happened.
Luther: Their Emperor, Scorpius invaded the Bright Forest, and slew the Queen.
Hero: And?
Luther: The Fey captured him, routed his forces, then retaliated.
Hero: Wow...

Find and defeat the Fifth Sin.

Complete this quest to unlock a new Challenge.
Luther: Do you feel that, my young friend?
Hero: What?
Luther: Something is making me angry.
Hero: Ahh, yes.
Luther: I think the Seal of Wrath is nearby.
Hero: Let's go.
Luther: Five Sins defeated, and five Seals found.
Hero: Yes.
Luther: Though I'm not certain what we do once we have them all.
Hero: Me neither.
Luther: Still, one step at a time.
Hero: Indeed.

Find and defeat the Sixth Sin.

Complete this quest to gain an Income Bonus in this Kingdom.
Luther: Aha! I'm on their trail now.
Hero: Yes?
Luther: Do you feel the hunger?
Hero: A little.
Luther: It means the Seal of Gluttony will be nearby.
Hero: I see.
Luther: If we follow our hunger, it will lead us right to it!
Hero: Lead on!
Luther: The Sixth Seal! Gluttony! Only one remains.
Hero: Pride?
Luther: Pride, indeed, my young friend.
Hero: Then what?
Luther: Then we go back to the Portal.
Hero: And?
Luther: Have faith, my young friend. We'll figure it out!
Hero: Very well.

Defeat the final Sin, and claim the last Seal Stone.

Complete this quest to unlock a new Challenge.
Luther: I'm so proud of how far you've come, my young friend.
Hero: Umm...
Luther: Oh! That's it, isn't it. Pride!
Hero: Yes.
Luther: Ha! I'm rather proud I figured that out!
Hero: Luther...
Luther: Argh! There I go again... Come on!
Hero: Very well.
Luther: All seven Seals are ours.
Hero: At last.
Luther: And finally... My head's clearing.
Hero: Good.
Luther: Now it's back to the Portal for us.
Hero: Okay.
Luther: No telling how long it's been there, but we'll close it for good!
Hero: Let's go.

Use the Seals to try and close the Portal.

Complete this quest to unlock Pride.
Luther: This is it. We can finally close the Portal.
Hero: What now?
Luther: I will break the Seals. I think they are holding it open.
Hero: Okay.
Luther: Stand back and brace yourself, my young friend.
Hero: I will.
Luther: This might get a little rough.
Hero: Very well.
Hero: Luther had made a terrible mistake.
Hero: The Seals were holding the Portal CLOSED, not open.
Luther: What have we done? We've OPENED the Portal...
Hero: Oops.
Luther: I need to report back to the Queen at once. This can't be good.
Hero: Okay.
Hero: Where once the Portal had been lighting the sky...
Hero: All we now saw was a dark passageway to another world...

Learn how to become a Doomsayer with Luther.

Unlock the Doomsayer Hero Class
Luther: I found a book near the entry to the Underworld Portal.
Hero: Let me see.
Luther: It is titled Doomsayer: The Sins of the Fathers.
Hero: What's inside?
Luther: It seems that prophets foretold the fall of Maraj...
Hero: Oh?
Luther: ...And nobody listened. They called themselves Doomsayers.
Hero: Read on...
Luther: It seems four sins brought them undone, as you have seen.
Hero: Yes.
Luther: Gluttony weakened them, and their Pride hid that fact.
Hero: Correct.
Luther: Then Greed drove them to expand, while Wrath blinded them.
Hero: Indeed.
Luther: I believe, my young friend, that YOU are a Doomsayer.
Hero: Well I'll be damned.
Last updated: 10/21/2021
GoWDB.com © Lyya (ashenbloom@gmail.com)
This is a fan site. All Gems of War contents are owned by Infinity Plus Two.
Game art images courtesy of Garyatrics.com -- check them out!
Team Builder
Publish Team
Suggestions