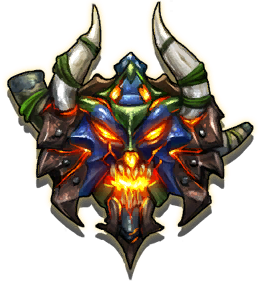 Lair of the Lava Wyrm

Axe of the Spire, 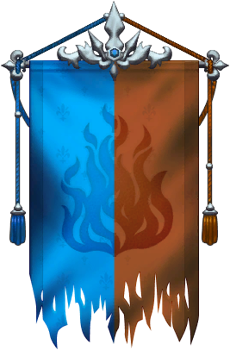 Goblin slaves are revolting against their Ogre captors. You must help them win the fight!

Complete this quest to unlock a new troop.
Hero: With the gate destroyed, we headed into the Ogres' fortress.
Hero: There was smoke everywhere, and signs of recent battle.
Luther: Stop! I hear a noise up ahead!
Hero: I hear it too.
Luther: My eyes aren't what they used to be. Tell me what you see.
Hero: Ogres, fighting... goblins.
Luther: We should help the Goblins. But take care. They'll likely think we're foes.
Hero: Let's go!
Luther: You fought well, young one.
Hero: Thanks, Luther.
Luther: These Goblins will join us now.
Hero: Really?
Luther: We'll need all the help we can get in the days ahead.
Hero: Help? For what?
Luther: This island holds a secret treasure. I need to find it.
Hero: As you say...

Deal with a cruel local Houndkeeper. You will be a better master for his dogs.

Complete this quest to unlock a new troop.
Luther: The Goblins say there is an Ogre in the fortress with some Warhounds.
Hero: Warhounds?
Luther: Aye! They're loyal and fierce in battle. We could use them.
Hero: For what, exactly?
Luther: What do you normally use hounds for, young one?
Hero: Hunting?
Luther: Aye, we have some hunting to do. But first, we deal with this brutish Houndmaster.
Hero: As you wish...
Luther: The hounds are ours!
Hero: Hunting, you said...
Luther: Aye. There is a beast on this island.
Hero: An Ogre?
Luther: No. Far greater than that. Once, my brothers and I would have hunted it together.
Hero: Your brothers?
Luther: A story for another time, young one.
Hero: As you wish.

Ascend the Broken Spire, travelling to the Ogre's second fortress.

Complete this quest to unlock a new Challenge.
Luther: Now, the second fortress awaits!
Hero: The second one?
Luther: Aye! There are 3 fortresses on the Broken Spire, each one higher than the last
Hero: So we climb?
Luther: The path is gentle for now. It's the beasts we need to watch out for.
Hero: Beasts?
Luther: Rhynax. Nasty big brutes. Ogres keep them as cattle.
Hero: Oh...
Luther: Those beasts are foul!
Hero: Ugh. I know...
Luther: It'll take a week to get the stench out of my armor.
Hero: Where to now?
Luther: We follow the path. The second fortress isn't far.
Hero: You've been here before?
Luther: Aye. But we never breached the second fortress. We will this time though.
Hero: If you say so...

Break down the gates of the second Ogre fortress.

Complete this quest to unlock a new Challenge.
Luther: Here we are! The second fortress at last!
Hero: What now?
Luther: This time there are two gates to get through.
Hero: Two?
Luther: Aye, but we have an advantage.
Hero: What's that?
Luther: Surprise. Last time they saw us coming; it didn't end well.
Hero: Oh...
Luther: That went unexpectedly well.
Hero: Glad to hear it.
Luther: I lost a thousand men on these walls before.
Hero: How many?
Luther: You heard me right. One thousand.
Hero: But how?
Luther: We were betrayed... by our allies. But enough! We have a fortress to storm.
Hero: Okay.

The second Ogre fortress is crawling with Undead. You must make your way through.

Complete this quest to unlock a new Challenge.
Luther: This fortress seems too quiet. It concerns me.
Hero: Why's that?
Luther: The bodies of my men. They're nowhere to be seen.
Hero: How could that be?
Luther: I worry about the Ettins - Ogre Shamans - who knows what they've done here.
Hero: Oh...
Luther: Come! We'll enter the fortress and see what awaits.
Hero: I'm with you.
Luther: The battle is won. You did well... outfought ME in fact!
Hero: I doubt that.
Luther: You're kind, but we both know the truth.
Hero: What is that?
Luther: My best days are behind me, my young friend. This hunt will be my last.
Hero: We'll see...

Set fire to the Ogre Fortress. It will give some peace to the restless spirits within.

Complete this quest to gain an Income Bonus in this Kingdom.
Luther: We need to burn this fortress.
Hero: But why?
Luther: I'll not have my men wandering this place as Undead for all eternity.
Hero: Oh...
Luther: It's the only burial I can give them.
Hero: I understand.
Luther: Once we do this though, there will be no more surprise. They'll know we're coming.
Hero: Okay.
Luther: It's done. May their souls find some peace at last.
Hero: I hope so.
Luther: We'd have taken this fortress if our allies had played their part.
Hero: Your allies?
Luther: Aye, the Knights Coronet of Sword's Edge, curse their filthy hides.
Hero: What happened?
Luther: We were ready to charge the gate, and they opened fire on us.
Hero: Oh...

You must climb the path to the final Ogre fortress.

Complete this quest to unlock a new Challenge.
Luther: The path gets steeper from this point onwards.
Hero: What's ahead?
Luther: I've not been this far, but expect more Rhynax.
Hero: This high up?
Luther: Aye - they're more nimble than they look.
Hero: Is that all?
Luther: Maybe some Hippogryph... If we're unlucky, some Stone Giants.
Hero: I'll keep an eye out.
Luther: Well done! The final fortress is within our sights
Hero: At last!
Luther: We'll need to find a way to get past it.
Hero: Past it?
Luther: Aye. What we seek is in the caves beyond the fortress.
Hero: Caves?
Luther: The Caves of Sheggra, the Lava Wyrm. She has that which I need.
Hero: Oh...

You must get to the caves beyond the fortress. Unfortunately, the Ogres know you are coming.

Complete this quest to gain an Income Bonus in this Kingdom.
Luther: We can't go through the gate this time.
Hero: Why not?
Luther: The Ogres will have seen the fire we lit. They'll be waiting.
Hero: So what now?
Luther: We can't go around it, under it, or through it. That leaves one way.
Hero: What's that?
Luther: We go over it. We need to catch some of those Hippogryphs.
Hero: Interesting...
Luther: I don't like this plan, but I see no other option.
Hero: Me too.
Luther: My men softened up the first two fortresses, Gods rest their souls.
Hero: Your men?
Luther: The Order of the Dragon. I am - was - their commander.
Hero: Really?
Luther: Aye. I'm the last one, but I'll not let their deaths be in vain.
Hero: Let's fly!

The Mouth of Madness

You must enter the caves beyond the fortress.

Complete this quest to unlock a new Challenge.
Luther: It worked! But now we need to get into those caves.
Hero: Okay.
Luther: There'll be guards. Ettins most likely, and worse.
Hero: What's in there?
Luther: Sheggra, the Lava Wyrm. She has the thing I need.
Hero: What's that?
Luther: In good time, my young friend. First, let's get into these caves.
Hero: Okay.
Luther: Now... to find Sheggra.
Hero: Where is she?
Luther: I don't know, but she's a Lava Wyrm...
Hero: So?
Luther: We take the hottest, brightest tunnels.
Hero: Ahhh...
Luther: She'll be in the heart of the mountain.
Hero: Lead on!

Ettins live deep within the caves. You must defeat them to reach Sheggra, the Lava Wyrm.

Complete this quest to gain an Income Bonus in this Kingdom.
Luther: Now the dangerous part.
Hero: Oh?
Luther: There will be more Ettins - worshippers of Sheggra.
Hero: Okay.
Luther: The Ettins use dark magic. They'll have a host of Undead with them.
Hero: Let's go.
Luther: We're almost there. We may yet hold the prize in our hands!
Hero: What prize?
Luther: The Heart of Sheggra. I must take it back to Sword's Edge.
Hero: Why?
Luther: My Queen, Ysabelle, lays dying of poison. The heart will cure her.
Hero: How?
Luther: Only the Heart of a Lava Wyrm can burn the poison from her body.
Hero: Let's go!

Only Sheggra's final guardians stand in your way. Three mighty Stone Giants guard the path to her lair.

Complete this quest to unlock a new Challenge.
Hero: The final passage led away to a glowing cave.
Hero: But three statues barred our way.
Luther: Three Stone Giants. It can't be this easy...
Hero: Oh?
Luther: I sense dark magic at work. We should proceed carefully.
Hero: Lead on!
Luther: Finally! We've made it.
Hero: At last!
Luther: Now we just need to kill this accursed Wyrm.
Hero: How?
Luther: The same way we kill everything, my young friend?
Hero: Oh?
Luther: Just make sure not to damage the heart!
Hero: As you wish.

The Heart of the Matter

The time has come for the final battle with Sheggra, the Lava Wyrm.

Complete this quest to unlock Luther for your army.
Luther: We have cheated the odds at every turn. Sheggra's heart awaits!
Hero: Indeed.
Luther: Are you ready, my young friend? Sheggra is unlike any foe you've met so far.
Hero: I'm ready!
Luther: I have Sheggra's heart! There is hope for Queen Ysabelle yet!
Hero: What will you do?
Luther: I must return to Sword's Edge. It's a journey I must make alone.
Hero: I'll miss you!
Luther: I'll be back before you know it, my young friend!
Hero: Really?
Luther: I love my Queen, but I've grown weary of the politics. I need a rest.
Hero: You've earned it!

Learn the secrets of becoming a Warlord from General Luther.

Unlock the Warlord Hero Class
Luther: So you want to learn the ways of the Warlord?
Hero: I do.
Luther: That's what an old man likes to hear! Are you ready?
Hero: Yes, I am.
Luther: Good, then we will fight some battles together.
Hero: Like old times?
Luther: Aye, young one, watch and learn!
Hero: Lead on!
Luther: Not bad, young one. Aye... not bad.
Hero: So...
Luther: Being a Warlord is about rage, anger and ferocity.
Hero: Okay
Luther: Channel your inner fire, but don't let it consume you.
Hero: I see.
Luther: It takes courage, young one, and you have that!
Hero: Thanks, Luther.
Last updated: 10/21/2021
GoWDB.com © Lyya (ashenbloom@gmail.com)
This is a fan site. All Gems of War contents are owned by Infinity Plus Two.
Game art images courtesy of Garyatrics.com -- check them out!
Team Builder
Publish Team
Suggestions